After having a child one is automatically enrolled as a member into the exclusive “parenthood” club where universal child-rearing truths remain the unifying bond between its members. Being blessed with two babies, my son Gabriel and daughter Savannah, my husband and I are privileged enough to receive front row seats, back stage passes, and leading roles in the biggest, scariest, and most rewarding live performance shows ever in life which demands constant improvisation from its players. Although thousands of new parenting books and DVDs can easily be found through various media channels they generally serve as basic outlines of what new parents can expect: happiness, bubbles, and sunshine 24/7…well parenting book, “The Sh!t No One Tells You About Toddlers”, is NOT that kind of book and I’m beyond grateful for that. “The Sh!t No One Tells You About Toddlers” is written by author Dawn Dais who’s a mother to two children under the age of five. Dawn is a mom with many hats, just like the majority of moms worldwide, and in between her never-ending job as a “child wrangler” she works as a freelance writer, designer, and filmmaker in Sacramento, CA. Her three previous books (The Sh!t No One Tells You, The Nonrunner’s Marathon Guide for Women, and The Noncyclist’s Guide to the Century and Other Road Races) topped Amazon.com best-seller lists and continues to receive feature recognition by numerous TV and print media sources. Although Dais’s new novel documenting her experiences with raising her own toddlers is currently available for pre-order with an official release date set for fall 2015, I was lucky enough to get my hands on a copy of the book recently. Several laughter filled nights later I completed the paperback book with absolute confidence that every single parent no matter the sex, age, or martial status will be able to relate to this author’s parental ups and downs.

Above Poem/Page from “The Sh!t No One Tells You About Toddlers” by author Dawn Dais . All copyrights apply.

Chapter eight, “You May Be Too Tired to Sleep Train this Child”, happens to be exactly where my husband and I find ourselves with Savannah. Even though she’s a year old now she STILL does not sleep throughout the entire night on a consistent basis. Maybe just four nights out of the week will she sleep completely through whilst the other nights require a midnight cuddle & feed. I’ve received plenty of advice from friends and family, as well as researching online for sleep training tips and so far I’ve haven’t had much luck with any. Since she’s so use to a midnight feed I’ve read the tip about slowly cutting down her ounces over a period of weeks until she gets nothing but a cuddle then immediately put back down and we’re trying to implement this training but to be perfectly honest we haven’t been consistent with it because WE’RE JUST TOO FREAKING EXHAUSTED to alternate from the robotic actions we’re already accustomed to doing! After reading the chapter’s journal entry titled “Bedtime Routine from Hell” I gained a huge appreciation for the nighttime hiccups we have with Savannah in comparison and it felt wonderful to know that we are not the only parents going through sleepless nights with a young child, a great comfort when constantly hear from friends and family how their babies and toddlers were sleeping through the night by three months. 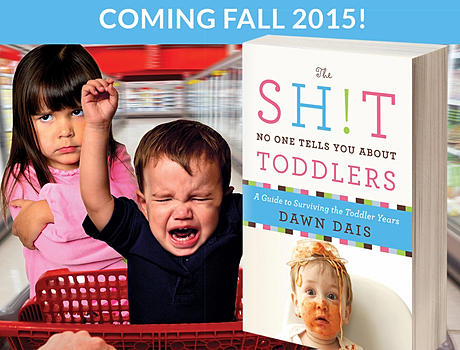 Dais’s unique sarcastic tone mixed with real life parenting advice, encouragement, and hilarious personal antidotes will keep readers entertained from cover to cover and I personally nominate it as the number one baby shower gift choice for expecting parents, as well as current parents. Remember, Dawn’s most new book, “The Sh!t No One Tells You About Toddlers”, will be released in Fall 2015 but is available for pre-order now. While you wait for the book you can stay connected with the author through Etsy, Facebook, Twitter, and Instagram.