I have already told you about my son Devon being Autistic. I can’t believe the difference in him since we have moved to South Carolina. Devon has started saying some words and is now able to distinguish between numbers and letters. This has made me so proud, you don’t know how far he has come in the last 3 years. 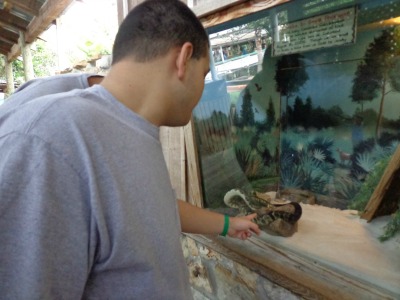 It doesn’t take much to make me proud of both of my children, but Devon is 18 years old and for him to be able to do these things is a big thing for me. Devon is 18 years old, by now most children his age are either in their last year of high school or in college, My Devon will be in school till he is 21, after that I have no clue what is going to happen, but that is just another step we will worry about when the time comes. Devon was diagnosed with Autism when he was 4 1/2 years old, I still remember that day like it was yesterday, up till that point we just thought it was something he was going through. He did everything early, from rolling over to walking, he was even saying words. That all stopped when he was 1 1/2 years old. All the words he was saying vanished, Devon was having meltdowns, tantrums, doing thing typical of Autism, but at that time I just thought it was just another “thing” he was going through, that any day he would say all those words again, even say Mommy again…But that wasn’t to happen.

When Devon turned 3 we put him in an Early developmental class in our local school, I remember the day we had to go in so they could meet with us to make sure this was the class for Devon… The tantrum Devon had, throwing himself on the floor and crying, The teacher looked at me and knew right away Devon needed to be in that class. When he was 4 1/2 we had a meeting with his case manager from the school district and they told me that they thought Devon needed to be evaluated by a Neurologist and they referred me to one in the area. the day finally came to go to our appointment, Devon’s father, me and Devon went to that doctor appointment and that was the day our lives changed. They did whatever test they did back then, sat me and my ex-husband down and came right out and said, Devon is Autistic, she asked us if we knew what that was, at that time there wasn’t much reference to Autism, I remembered this TV special I had seen when I was younger about Autism and it really wasn’t something I wanted to remember and also I knew of the movie Rain Man, so to answer her question I said yes, I knew of Autism not about it.

The Doctor didn’t give us much faith that day, she only pointed out all the negative things and to top it all off she told us that she didn’t think it would be in our best interest to have any more children, that if we did the child might come out with a mental handicap also..unknown to the doctor I was 2 months pregnant with my daughter, when she said those words to me my heart fell I looked at her and said..”well we are already expecting another child” all she said to us was to go to our local library and find books on Autism and read about it. That was it, we walked out of there with all our dreams crumbled, all the “dreams we had for him…him playing football…his first girlfriend, the prom, graduating high school, going to college, getting married and having children” everything I always dreamed of was gone with that one word Autism.

This was 14 years ago, they have come along way in the treatment for Autism, things they didn’t have back then. When I walked out of that doctor’s office that day, I walked out a different person, my love for my son never changed but I think it made me stronger, I couldn’t just break down and pity myself, I had to be strong for him and myself, because Devon will always need me to be strong, so I can be his voice and he can be heard. it was a few years ago that I finally heard Devon say something I was longing for, one simple word “mommy” it made me the happiest person, I never thought I would hear him say that word again, and I owe it to his teachers and his step father…my husband Love’s Devon as if he was his own, when Devon’s father couldn’t live with that fact that Devon “wasn’t perfect”in his eyes and he couldn’t deal with the everyday stress, he pulled away from us and we divorced. Some parents just don’t have the strength to take care of a special needs child, I never once thought about giving my child up, he is mine and is perfect in every way…