The school year is almost coming to an end. Then comes the long summer hours—many hours to keep the kids occupied.  How about some ideas that are educational and that don’t involve a screen?  It’s called the Top Trumps card games.

Top Trumps card games are popular, fast-paced games that are educational at the same time. You can learn how to play the game within a minute. And, they have games that come in several different themes. 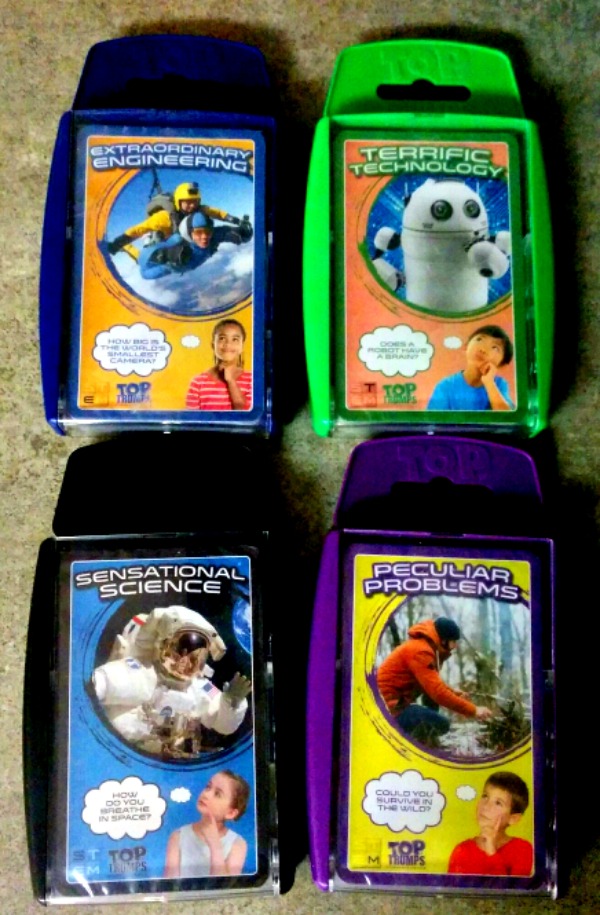 I received the Top Trumps STEM-themed games: Terrific Technology, Peculiar Problems, Sensational Science, and Extraordinary Engineering.  These decks are focused on STEM, science, technology, engineering and mathematics. Schools across the country are trying to encourage education in the STEM subjects. And, what better way to learn about STEM than through a game that kids will enjoy?

Each deck sells for $9.99 and they each come in an easy-open, hard case.  They are easy to transport and keep together, making it nice to take on a trip in the car, on an airplane, or anywhere.

The game, as mentioned above, is super easy to learn. And, each card comes with an interesting “Top Trumps File” with information about the STEM subjects. The information will fascinate the kids and stimulate interest and imaginations. For example, for Extraordinary Engineering, did you know the tallest and second-fastest roller coaster is the Kingda Ka in New Jersey and it reaches 128 mph in under 4 seconds? I think I’d pass out if I went on that ride!  Or, did you know the Hubble Space Telescope travels about 5 miles per second around the Earth (taken from the Terrific Technology cards)? These are just a couple of cool facts you can learn while playing these games!  Play and read all of the cards from these STEM games and you’ll be a wealth of knowledge!!

Did you know that even JK Rowling grew up with Top Trumps and asked to join in on the fun by becoming the author of the Potter Top Trumps Games? That’s pretty cool!

The STEM Top Trumps Games I received are for kids ages 6+ years. Each game can have 2-6 players. So check the games out on their website. They’ll make a fun game for family night and for the upcoming summer days!