I have to admit, when I initially received Accell's PowerSquid Surge Protector and Power Conditioner, I didn't really understand why they had designed it the way they did.  Then I read about how it “accommodates up to 5 bulky transformer plugs with ease,” and then I understood!  Then, I thought, “How genius!”

I can't tell you how many times I've had to unplug other things in order to be able to plug something else into my old surge protector.  And, sometimes when I did that, I had to follow the line I was going to unplug to make sure it wasn't something important, like the WiFi router.  If I unplugged the router plug, I'd have half of my family yelling, “What happened to the WiFi?!” 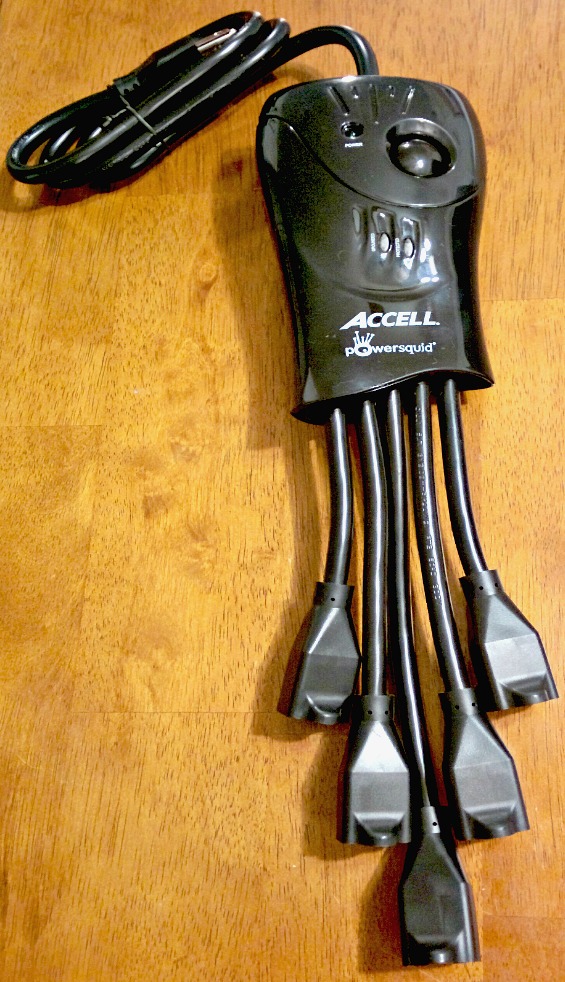 Well, with the PowerSquid, it's a lot easier to plug in the bulkier plugs without worrying if they are going to fit around the other plugs. So, no more rotating plugs to make everything fit.

The PowerSquid Surge Protector and Power Conditioner has much to offer (the following information can be found at Accell's website).

This surge protector is relatively light in weight, making it easy to move when needed. And, with its 5 movable “arms,” it's more flexible than the common box-type surge protectors. Each arm can move (to some degree) if pulled on, which may help prevent the plug from being dislodged (which has happened with my other surge protector numerous times when vacuuming and which is so frustrating).

It can be mounted to the wall and has a 3-foot grounded power cord; both of these features add to its ability to be convenient and accessible. All of the cords are thick and seem to be durable and well protected. It also lays nice and flat and fairly low, so it would be easy to fit in many spaces. Last of all, it does look like a squid. So, if you have children, make sure they are aware it's not a toy!