Delicious vanilla cupcakes are frosted with a light and fluffy homemade frosting then topped with a fondant fin in this adorable Shark Fin Cupcake recipe! It’s the perfect cupcake recipe for a shark week treat or an ocean-themed party!

These easy-to-make Shark Fin Cupcakes are the perfect sweet treat to sink your teeth into during Shark Week or at a beach-themed party!

Shark Week 2020, which starts on August 9th, is just a few more days away.

I can hardly wait! It’s one of my family’s favorite television events.

And it’s even more fun when served up with some shark-themed treats!

This fearsomely-delicious Shark Fin Cupcake recipe is a jawsome way to join in the fun.

It’s also a quick and easy recipe that everyone will want to take a bite of!

How to Make Shark Fin Cupcakes

These shark-themed cupcakes not only taste great, but they are really easy to make.

All you need are a few ingredients and about 45 minutes.

Disclosure: This blog post contains affiliate links for products or services I think you’ll like. This means if you make a purchase from one of these links, Kelly’s Thoughts on Things may make a small commission at no additional cost to you.

Kitchen Tools You May Need

To make these sharktastic cupcakes, you can use either your favorite homemade cupcake recipe or a boxed mix.

The recipe below is for the homemade frosting and explains how to make fondant shark fins and decorate these super cute cupcakes.

You can find the complete ingredient list and instructions in the printable recipe card at the end of this post.

This shark fin cupcake recipe is one of those recipes that look as if you spent hours making and decorating when it reality this shark-themed treat can be ready to go in less than an hour!

You start with plain vanilla cupcakes, make some simple yet delicious frosting, and then throw together some candy shark fins to top them off.

How to Make Fondant Shark Fins

The shark fins on these shark fin cupcakes are made from fondant, but don’t worry!

Working with fondant is actually a lot easier than most people think.

While you could buy grey-colored fondant, it’s not an easy color to find.

It is, however, easy to color white fondant.

It’s literally as simple as adding a few drops of black gel food coloring then kneading the fondant until it becomes uniform in color.

Then, to form each shark fin, slightly flatten each sphere and press the top into a point. It should look like a triangle.

Next, curve the tip of the fondant triangle to give it a more realistic shape.

Putting It All Together

Once the shark fins are made, all that’s left is to make the frosting using my easy homemade frosting recipe, and then put it all together!

After that, your Shark Fin Cupcakes will be ready for any feeding frenzy!

Just make sure to enjoy them while chilling on the beach, celebrating at an under-the-sea birthday party, or simply kicking back and enjoying your favorite Shark Week show!

Looking for more delicious cupcake recipes like this Shark Fin Cupcake recipe? Check these out: 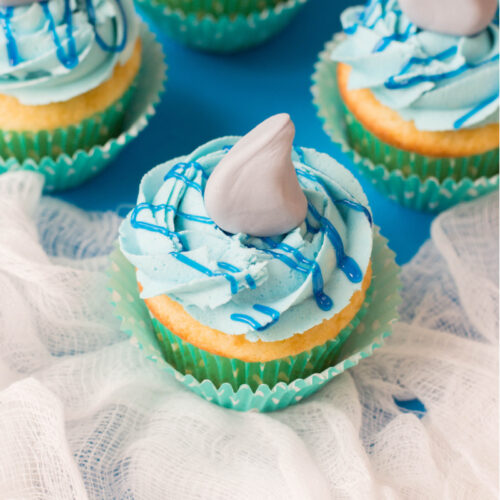