I will be sharing another place to visit here in SC, The Patriots Point Naval & Maritime Museum in Mount Pleasant, SC. The ships on display here bring to mind the incredible sacrifices our servicemen made in the Greatest Generation. Start with the submarine, The USS CLAMAGORE , unless you are claustrophobic, because the quarters are incredibly tight. The thought of being under the sea in this tiny little boat is impossible to comprehend. The captains quarters is smaller than an old half bathroom. How these men were able to fight and not go insane is a tribute to their physical and mental toughness. 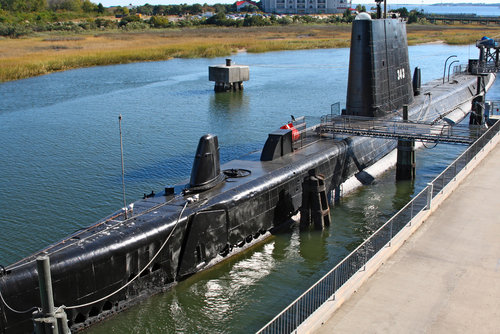 USS CLAMAGORE – The CLAMAGORE (SS-343) was built as a Balao-class submarine by Electric Boat Co., Groton, CT. Commissioned too late for action in World War II, CLAMAGORE would serve 30 years during the Cold War. In 1948, CLAMAGORE underwent GUPPY II conversion to improve underwater performance. GUPPY was the term used by the Navy for its Greater Underwater Propulsion Program.

CLAMAGORE was one of only nine submarines converted to GUPPY III (1962-63). A 15-foot (55 ton) section was added (forward of the control room) to accommodate upgrades in technology. This would be the ultimate upgrade for World War II era diesel-powered submarines. CLAMAGORE was decommissioned in June 1975.

Added to the Patriots Point fleet in 1981, CLAMAGORE is the only GUPPY III submarine preserved in the United States. In 1989, CLAMAGORE was designated a National Historic Landmark.

The Yorktown, the most famous of the three, is very impressive in it’s size and power. An entire day could be spent just on this ship without covering it all. The plane displays and the sheer size take hours to visit. The USS Yorktown is the centerpiece of the museum as was built in only sixteen and a half months in 1943 to serve in the Second World War. The ship saw continued service through to 1970 when it was decommissioned, having operated off Vietnam in the mid to late 60s. Visitors can take a number of tours around the ship and see the hangar deck, flight deck, bridge and the Congressional Medal of Honor Museum.

The USS YORKTOWN (CV-10) was the tenth aircraft carrier to serve in the United States Navy. Under construction as BON HOMME RICHARD, this new Essex-class carrier was renamed YORKTOWN in honor of YORKTOWN (CV-5), sunk at the epic Battle of Midway (June 1942). Built in an amazing 16-½ months at Newport News, Virginia, YORKTOWN was commissioned on April 15, 1943, and participated significantly in the Pacific Offensive that began in late 1943 and ended with the defeat of Japan in 1945. YORKTOWN received the Presidential Unit Citation, and earned 11 battle stars for service in World War II. Much of the Academy Award-winning (1944) documentary “The Fighting Lady” was filmed on board YORKTOWN.

In the 1950’s, Yorktown was modified with the addition of an angled deck to better operate jet aircraft in her role as an attack carrier (CVA). In 1958, YORKTOWN was designated an anti-submarine aircraft carrier (CVS), and would later earn 5 battle stars for service off Vietnam (1965-1968). The ship also recovered the Apollo 8 astronauts and capsule (December 1968). YORKTOWN was decommissioned in 1970 and placed in reserve; and in 1975, was towed from Bayonne, NJ to Charleston to become the centerpiece of Patriots Point Naval and Maritime Museum.

Both ships were named in honor of Seaman Bartlett Laffey, a Civil War Medal of Honor recipient.

The second LAFFEY was built as an Allen M. Sumner-class destroyer by Bath Iron Works (Maine). Commissioned February 8, 1944, LAFFEY supported the D-Day landings at Normandy on June 6, 1944. Late that summer, LAFFEY transferred to the Pacific Theater to join the US offensive against Japan. While operating off Okinawa on April 16, 1945, LAFFEY was attacked by 22 Japanese bombers and kamikaze (suicide) aircraft. Five kamikazes and three bombs struck her, and two bombs scored near misses to kill 31 and wound 71 of the 336-man crew. LAFFEY shot down 11 of the attacking aircraft and saved the damaged ship. LAFFEY’s heroic crew earned her the nickname: “The Ship That Would Not Die.” LAFFEY was awarded the Presidential Unit Citation and earned five battle stars for service during World War II.

LAFFEY was repaired and was present (as a support ship) for the atomic bomb test at Bikini Atoll in 1946 (Operation Crossroads). On June 30, 1947, LAFFEY was decommissioned and placed in the reserve fleet. Re-commissioned in 1951, Laffey earned two battle stars during the Korean War. LAFFEY underwent FRAM II (Fleet Rehabilitation and Modernization) conversion in 1962 and served in the Atlantic fleet until decommissioned in 1975. LAFFEY, the only surviving Sumner-class destroyer in North America, was added to the Patriots Point fleet in 1981, and designated a National Historic Landmark in 1986.

No matter which warship you’re on, you cannot help but imagine the lives of the sailors. For the submariners, the doldrums of a long patrol, cruising on the diesels, punctuated by the harsh call for a crash dive. On the destroyer, keeping watch on the horizon, shepherding the battle group, then going on the hunt for that ghostly swish of an enemy sub’s propeller wash. Lastly, on the carrier, on edge watching for that hook to snatch the arresting gear, followed by a mad scramble to get the fighter parked, secure chocks, and help get the pilot out. Yes, you can lose all sense of time here. And it will be time not wasted.