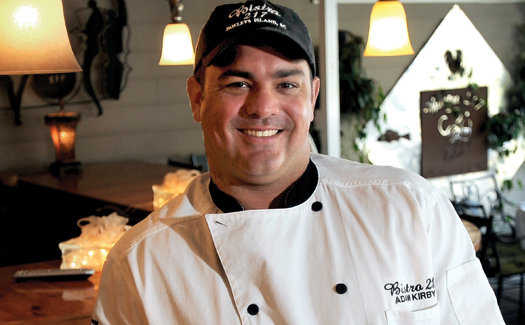 Kirby Co-Owns Bistro 217, Rustic Table, Two of the Hammock Coast’s Best Restaurants
Chef Adam Kirby, co-owner of two of the Hammock Coast’s best restaurants, Bistro 217 and Rustic Table, was one of four people named Chef Ambassadors and will spend a year representing South Carolina at key tourism and agricultural events.
Throughout the year, the chef ambassadors will participate in a number of culinary and tourism-specific events, hosting cooking demonstrations, conducting educational seminars and discussing the offerings found in the cities in which their establishments are based.
Hammock Coast residents and many vacationers are already familiar with Kirby’s work.
A graduate of Le Cordon Bleu of the Western Culinary Institute, Kirby is the chef and co-owner of Bistro 217 on Pawleys Island – an establishment he’s been with since it opened in 2004. Pulling inspiration from both his Southern roots – both his mother and grandmother were fantastic home cooks – and time spent in Hawaii, Portland and San Francisco, Kirby’s regularly changing menu incorporates locally sourced eclectic elements, making his dishes exciting, flavorful, and most of all, memorable.
Bistro 217 is a 4.5-star restaurant, according to Trip Advisor and Yelp, as is Rustic Table, which serves made from scratch Southern comfort food.
In its third year, the South Carolina Chef Ambassador program was an initiative Governor Nikki Haley enacted in June of 2014. The Chef Ambassadors program seeks chefs who embody the best of South Carolina’s food scene, both in the quality of their provisions, as well as their dedication to using healthy, locally-grown ingredients.
Joining Kirby as a chef ambassador in 2017 will be William Cribb of Cribb’s Kitchen and Willy Taco in Spartanburg; Amy Fortes of Flipside Café in Fort Mill, and Sean Mendes of Roadside Seafood in Charleston.

About the Hammock Coast

Georgetown County’s casual charm and Southern hospitality earned it the nickname Hammock Coast. Adventure and relaxation blend together in perfect harmony like the flowing and ebbing of waves on the beach along the Hammock Coast. With five communities – Garden City, Murrells Inlet, Litchfield, Pawleys Island and Georgetown – comprising the pristine coastal area between Myrtle Beach and Charleston, you can experience South Carolina’s the Hammock Coast like never before.
Georgetown County offers an abundance of accommodations for guests, including beachfront homes, hotels, cozy bed and breakfasts and camping. No matter where you stay along the Hammock Coast, the area’s stunning natural beauty is never far away.
For more information, visit www.HammockCoastSC.com.
How To Make A Gluten Free Cake (3 Recipes)
← Previous
7 Things in Everyday Life That Are Worth the Wait
Next →
Click here to cancel reply.