There has been much in the media about the epidemic of opiate addiction that has emerged in the US since the 1990s. When considering that over 65,000 people die every year as a result of a fatal opiate overdose, this is a significant problem that we all need to take action on. Despite the fact there are numerous opiate treatment centers in the US, the crisis has hit hard across the country and there need to be more if we want to eradicate this illness completely. 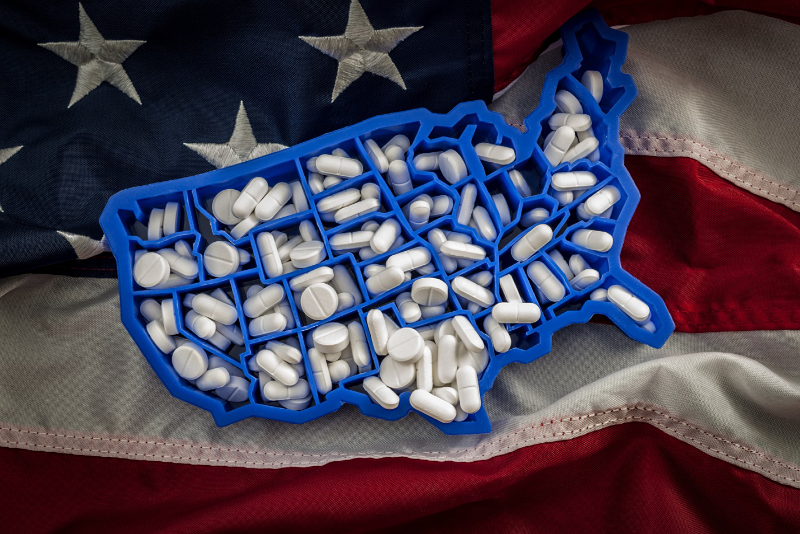 But why has opiate abuse become an epidemic in America today? In this article, we take a closer look at where this sinister phenomenon originated and how it takes its grip on people from all walks of life.

The Rise of Painkilling Prescription Medications

In the 90s, physicians across America started to use painkilling drugs manufactured from a synthetic form of the street drug heroin, known as opioids. OxyContin, Percocet, and Vicodin are examples of some of the prescription painkillers containing opioids and each type has huge potential to be addictive. However, in the early days of prescribing opioids, they were considered among the medical profession to be entirely safe.

As the years progressed, big pharmaceutical firms looking to get into the market produced more variants of opioid-based painkillers, incentivizing physicians to use their drugs in prescriptions for chronic conditions. The net effect was that more people every year joined the ranks of others set on a journey to opioid dependence or addiction to the extent that it has now been termed an epidemic that’s sweeping America.

Why Are Painkillers Addictive If They Are Prescribed By Physicians?

Unfortunately, many people who have been prescribed opioid-based drugs for chronic pain have the false sense of security that the medication they’re taking is safe. However, synthetic opioids work as painkillers by creating the same effects as heroin which blocks the neurotransmitters sensing pain by flooding the body with a euphoric sensation.

When regularly taking any medication containing opiates it is common for people to develop a tolerance to their effects. When a person is medicating for pain, they can easily find themselves taking more pills to relieve their distressing symptoms. However, physicians are now much more reluctant to increase doses of opioid medications, which presents a problem when tolerance is developing.

When it becomes difficult or impossible to get more drugs to cope with painful symptoms, it is not uncommon for people to seek alternative ways of obtaining their medication. Faking prescriptions or stealing them from others is one route people use, whereas others seek out the more dangerous street alternative known as heroin.

People who are coping with chronic pain conditions and have reached an impasse for getting the higher doses they need to manage, they often turn to heroin. Although the illegal drug works in the same way as synthetic opiates, they pose a significantly higher risk to the health – and the life – of the user. Because heroin is manufactured in dirty spaces and cut with other substances to dilute it for increased dealer-profit, there are additional risks present. For this reason, it is not unusual for a person to have a fatal reaction to heroin the very first time they take it. Although it is widely considered that sharing needles is the biggest risk of spreading disease and infection, using the same needle without sterilizing it between uses is just as significant.

What Are The Signs of Opiate Overdose?

Because of the high risk of overdose from opiates, it is important to raise awareness of what to look out for. When someone has overdosed on opiates, the brain’s neurotransmitters are overwhelmed and a key part of the body’s impulse to breath is interrupted. If a bystander is quickly able to recognize that the person is having difficulty breathing and knows how to respond immediately, it is possible to reverse the process and save someone’s life.

Although America is very much in the grip of an opiate epidemic and resources to treat people are stretched, there are plenty of options available. Addiction to prescription drugs is a complex version of the illness, largely because it originates in the physician’s office. Many people initially taking drugs they felt were safe for the treatment of pain to find themselves unable to stop using them are often unaware of whey they have become dependent. For this reason, it is often left to others close to them to see the warning signs and take action on their behalf.

Opiate addiction is particularly insidious because it has a dramatic effect on brain function. Taking mind-altering drugs containing opiates constantly interrupts natural neurofunction, which can have a very damaging effect on a person’s emotional, physical and psychological health if continued without attending an opiate treatment center. Many people have found holistic therapies to be particularly beneficial in opiate rehab as it addresses many of the underlying issues people have when they abuse prescription drugs. It is also possible to find an alternative pain management system using completely natural therapies rather than highly toxic drugs. Ultimately, there is a path to recovery to everyone who has been gripped by opiate addiction and the prospect of a fulfilling life in the future is very real if they are prepared to make a commitment to sobriety.