While tap water contains less bacteria and harmful BPA than single-use bottled water, a kitchen water filter is taking it to the next level. 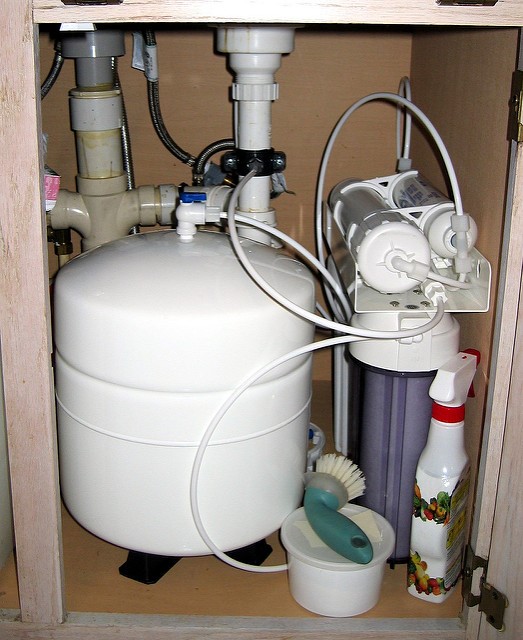 Single-use bottled water has been rising in popularity among families and individuals alike, in spite of their lack of FDA regulation. According to the NRDC:

A nice thought when importing water from around the world, eh?

While it is no longer a secret that bottled water contains more bacteria than that of tap water, water from the tap is still a sensitive issue for some. Chemicals like fluoride and chlorine which are present in tap water around the world are reason enough for consumers to make the switch to filtered water in their homes –instead of single-used bottled water.

Aside from removing chlorine and fluoride from municipal tap water, the benefits of an under sink water filter go on to include a number of other factors you may not have previously considered:

Drinking water that is free of harmful chemicals can actually lead to disease prevention; illnesses such as candidiasis (chronic yeast infections) and others which result from a lack of a healthy microbiome in your body can be prevented by drinking filtered kitchen tap water.

The truth of the matter is that chlorine eliminates micro-organisms for your safety, however it also kills the healthy gut bacteria your body needs to properly digest food and keep bad bacteria in check (i.e. Candida).

With every glass of chlorinated tap water you drink, you're eliminating swaths of good bacteria from your body which help fight off a host of other illnesses. And illnesses aren't the only thing healthy this “good bacteria” fight off –without them, Candida can also leave a thin grimy layer on your skin, cause dandruff, clog hair follicles, and eventually lead to baldness. If you don't want to take my word on it, it's time to read up on Candida and the effect of chlorine on healthy gut flora. You're more likely to take it to heart if you own it; no one else is going to take your health as seriously as you do.

In addition to those concerns, both the Environmental Protection Agency and the Center for Disease Control in the United States of America deem chlorine a harmful substance with good reason –large amounts of chlorine can lead to respiratory issues, and that's just for starters.

Both tap water and bottled water also come with heavy metals like lead and even small doses of mercury. Although these levels are deemed safe by government bodies, it seems more prudent to assume that's simply because there's no way they can remove all of them from the municipal water supply and it's easier to change a standard. No heavy metals in your body are acceptable, period.

To make this information your own, why not learn about the fall of the Roman Empire, or how they increased “safe” levels of radiation exposure in the United States of America after the Fukushima nuclear disaster started sending over radioactive heavy metal plumes by sea and air in the 4+ years the disaster has been going on for. Moral of the story: lead makes you stupid, and governments can change safe levels like we change underwear.

An under sink water filter is also handy for cooking. Washing vegetables, making soups, refilling a water bottle (one that's hopefully free of BPA), and protecting the immune systems of young ones in the family are all part and parcel to owning a water filtration system at home.

The supply chain in its many forms is doing a lot of damage to human health; transporting necessities across borders means that corners need be cut. Water is bottled in plastic not glass, pipelines leech heavy metals, foods are irradiated –the list goes on and on. And it gets worse every year, and every year we're told it's safe.

If your own government isn't taking your health seriously, maybe it's time you did. What do you think? Let us know in the comments.

Totally agree that we need to take care of ourselves and not depend on the government to protect our health. Even if water is tested to be clear of contaminants at the public water supply, that doesn't mean that the water coming out of your tap is safe. A lot can happen along the way! There are several good undersink reverse osmosis filters like the one in your photo. We opted for a Berkey countertop gravity filter at our house. It removes all kinds of contaminants including fluoride, and it's portable.