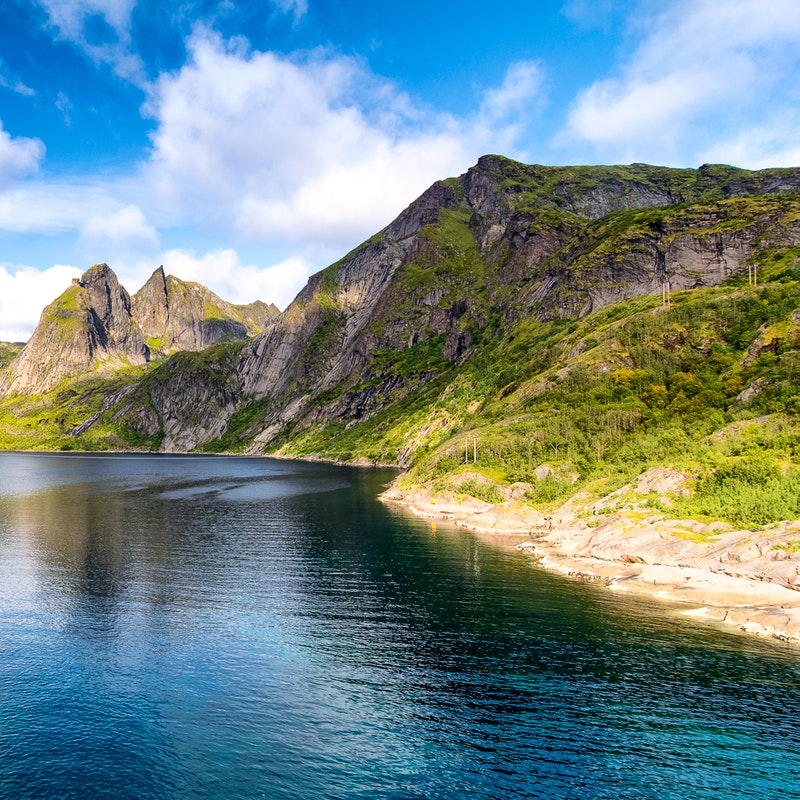 Millions of years worth of glacial activity have left Norway blessed with an astonishing coastline of perfectly carved, crinkle-cut Fjords. Along with the spectacular scenery, each Fjord has its own unique attraction. Some of the top fjord journeys in Norway include:

Almost every cruise to the Norwegian fjords will visit Geirangerfjord. This canyon-like gem is Unesco-listed and it is considered to be one of the greatest masterpieces in nature with gorgeous waterfalls falling down majestic mountainsides in every direction. The Seven Sisters, The Suitor, and The Bridal Veil are three of the most photogenic, with an average drop of eighty-two feet. You can admire them from the comfort of your cruise ship or book a guided kayak tour if you want to get close and personal.

A 22-mile branch of Storfjorden cutting into the Sunnmore Alps, is rarely visited by larger cruise ships but you may be lucky enough to find a smaller voyage that visits here. It is one of the best-kept secrets in Norway and a smaller ship can take you to enjoy the meadows, steep rock walls, isolated mountains and small, rural communities.

Storfjorden is a remote wilderness that’s a haven for wildlife. As you cruise through this area, be sure to keep your eye out for whales, porpoises and dolphins swimming alongside, and sea eagles soaring in the sky overhead. As you glide past Strandafjellet Mountain be sure to look up and take in the absolute beauty. It’s one of the greatest skiing locations in Scandinavia and was voted one of the top ten places to visit in the country by Norwegians themselves. If want to enjoy panoramic views of the Sunnmore Alps and the fjord, you can take a gondola ride to the 3,500ft summit.

Aurlandsfjord and the Flam Railway:

The tiny village of Flam lies on the banks of the Aurlandsfjord; here you can join one of the most spectacular train journeys in the world, twisting through steep inclines, tight bends, and tunnels, and stops to take in the spectacular sights such as the awesome 738ft Kjosfossen waterfall. At the top of the 2,845ft mountain plateau, you’ll reach Myrdal station, where there’s nothing but a ticket desk, waiting room, small cafe, and some amazingly unforgettable views. Scenic, regular and high-speed trains run through Norway regularly and this is just one of the stunning journeys on offer.

Lysefjord and the Pulpit Rock:

Standing at 1,982ft high, the pulpit rock is one of the most spectacular viewing platforms in the world, topped by a plateau that measures roughly around 82x82ft. If you want an active experience, it’s a good idea to take a hike and stand on the top of the rock for some beautiful, unforgettable views across the Lysefjord. If you’ve ever watched the movie Mission Impossible: Fallout, you might recognize this area from some of the scenes.

Nordfjord and the Briksdal Glacier:

At the eastern end, the Nordfjord is divided into three different arms below the Jostedalsbreen glaciers, with the stunning village of Olden sitting at the southernmost of the arms. From this spot, you are able to take a troll car or embark on a guided hiking tour offered by Norwegian Fjord trips through the Oldealen Valley to the Briksdal Glacier, where you can watch in awe as the stunning blue and green of the ice at it swoops down to almost four thousand feet to the glistening turquoise lake at its foot.

Rated by National Geographic as the number one natural heritage site in the world, the Naeroyfjord has also been rumored to be the inspiration for the snowy scenes in Disney’s Frozen. Past mining efforts here have left behind an interesting labyrinth of caves that you can explore.