Board games are a fun way to entertain your party guests. But with so many games out there, how do you choose one? Well, here are 7 of our favorite board games! 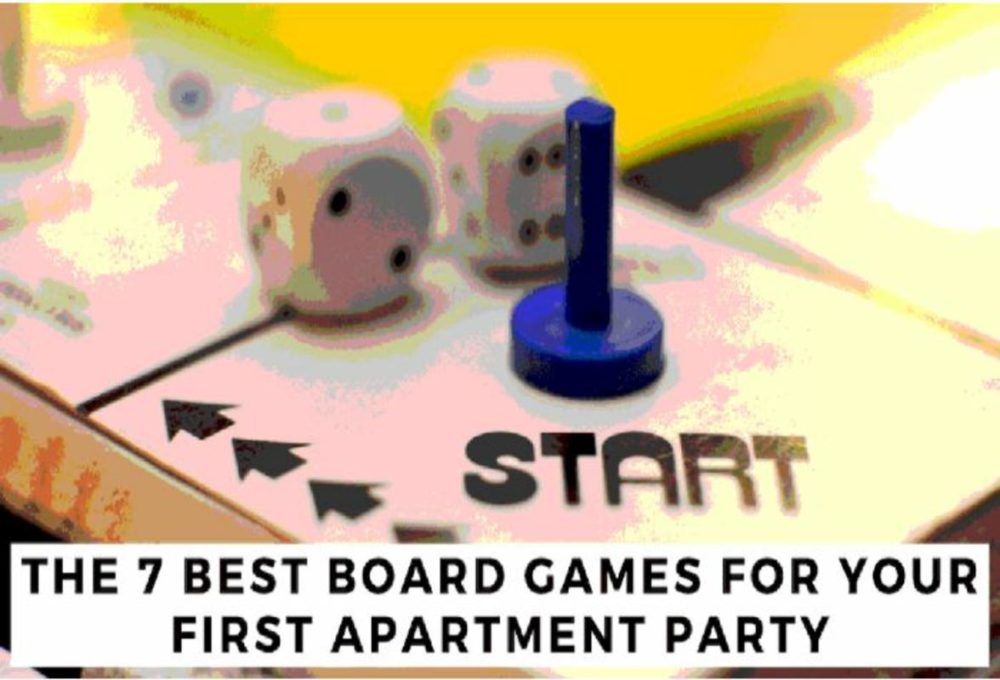 Living in your first apartment is exciting! Even better is the opportunity to invite your friends over on your own terms.

You get to plan the guest list, choose the menu, and organize the entertainment.

How do you entertain a group of people who all have different interests? Is it possible to do that and still pull off a memorable party?

The food and guests are up to you, but we have the answer to your entertainment dilemma:

These seven party games run the gamut from tame to wild, and they’re sure to be a hit at your first apartment party, no matter who you invite.

Apples to Apples is a classic card game with one sneaky twist:

The better you know your fellow players, the more of an edge you have.

With this game, everyone gets a group of red cards. Each card features a noun. The “judge” player reads a green card, which features an adjective.

Players must choose a red card from their hand that they think matches the green card in play.

What you think matches might not be what the “judge” player agrees with. Your success depends on your ability to figure out how they think!

This game can be family-friendly (there’s a version just for kids) or as wild as your imagination makes it. But if you want the adults-only version, check out Cards Against Humanity. It’s an offshoot by a different company, but it’s played the same way.

2. The Game of Life: Quarter-Life Crisis

Mimicking the idea of Hasbro’s Original Game of Life, this version takes the game to a new level.

Players must keep up with the Joneses as they try to get a good job, buy a fancy house, and pay their bills.

The difference? Instead of the old standbys of extra taxes and more kids piling up in your car, this game hits the nail on the head with real-life struggles. Drop your phone in the toilet? Pay a fee. Find a spider in your house? Burn it down!

To win, you have to be the first player to pay off your ridiculous $500K debt. So while it is fun and games, it’s also a great way to teach financial skills to young adults.

What Do You Meme? is an adult party game in which you have to create memes to win.

You think you’ve seen them all, and then that one meme shows up and goes viral in a thousand different variations. Well, in this game, you get to create your own winning memes!

Play is similar to Apples to Apples and Cards Against Humanity, except a common meme photo is on display. Players caption the meme by selecting the best-fitting card in their hand. The judge decides the winning text that matches the picture.

Play continues until all players get hungry, then a pizza must be ordered. So says the directions, and rules must be obeyed!

The original version of Codenames (there are dozens of subsequent versions) breaks players into teams of spies. Cards are spread out on the table with different pictures on them. These pictures are the “agents” your spy team has to find.

Play begins when one player gets a one-word clue and a number to use as hints. Based on those hints, the other teammate has to guess the word.

The challenge is to help your partner guess all of the “agents” on the table. Prepare to be the most notorious gumshoe at the party!

This game is an updated take on everyone’s favorite card game, but with a rapid-fire pace.

In Uno Attack, play begins as it does with the original Uno game. All players get seven cards. On your turn, you must play a card that matches the color or number on the top of the discard pile.

But here’s how this version is different:

This is where stress levels rise because you never know how many cards are going to come out.

You thought you only had to draw two. Instead, you got 47. Have fun sorting them all before your next turn!

When you want to get your guests up and moving, Twister is the perfect answer.

Two players take off their shoes and stand on a yellow and blue circle at opposite ends of the mat. A third player spins the arrow and directs the players on how to move.

The first player to fall loses, and a new player takes their place to contest against the reigning champion.

There’s no doubt that kittens are cute. The popularity of internet cat videos has spawned an entire slew of shows and stations where viewers can watch nothing but cats at their finest.

Now cat lovers and haters alike can enjoy these furry felines in the card game, Exploding Kittens. (Don’t worry, there are no actual cats involved in this game.)

Every player gets four cards to start. Players choose a card and follow the instructions. The object is to collect matching cards while avoiding Exploding Kitten cards.

If you get one, it’s game over. These cats don’t have nine lives.

Don’t sweat the entertainment for your party. With any of these games, everyone is sure to have a great time.

Instead, grab a few board games and then focus on your menu. That’ll take a little more work. Isn’t your neighbor a vegan? Doesn’t so-and-so have a shrimp allergy?

You want your party to be one everyone will remember, but not because your food sent them to the hospital!

Angus Flynn is the Property Manager for 2300 Wilshire. With more than five years of experience working with high-end apartment communities, he delivers white-glove service to each of his residents and prospects.