Bogotá, Colombia’s capital is one spectacular yet pretty untouched tourist haven. The city stands at 8,000 feet above sea level with plenty to offer the world such as amazing street art, spectacular fashion, rich culture and history. This city gained its popularity due to it being among the hottest tourist destinations in the world. When it’s cold in the US or UK, many tourists travel to hot area and Bogotá serves a warm welcome. 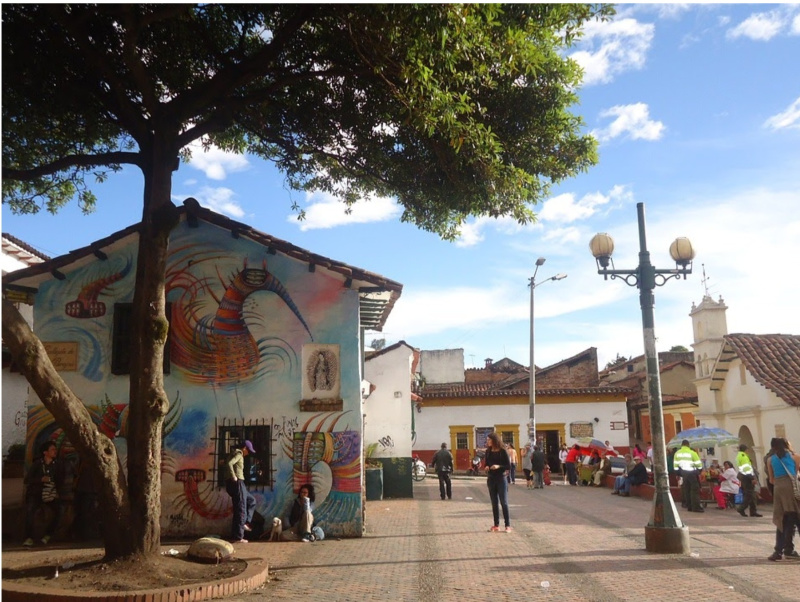 Bogotá is quickly developing into a fascinating and reputable cosmopolitan holiday destination in Latin America. Reports and surveys show an exponential increase in the number of tourists who visited in the last five years. The friendly locals, cultural diversity, not to mention the intoxicating atmosphere, make this city top in anyone’s bucket list.

The majestic city of Bogotá gives the area an aura of prehistoric culture fused with cool and hippy trends. The older generation feels right at home and the youth can indulge in exciting activities around the city. The city tours are quite affordable and don’t be shocked to know that you can actually make a free tour in Bogotá. The top 7 must-visit places are as below;

Santa Clara is one of the oldest churches in Colombia and serves as an iconic landmark. It was built in the 17th century, that’s over 50 years ago! The interior of the church is filled with extravagant decorations leaving many in awe. The ceiling is painted in a gold floral motif and the walls are decorated with sculptures and paintings of Saints. The church has now been repossessed by the government who have turned it into a museum.

The Cerro Monserrate mountain is a bewildering sight standing at 10,341 feet high overlooking the entire city. One can easily get to the top using an aerial tram or a funicular. A small historic church can be found at the top, dedicated to ‘El Señor Caído’ which means ‘The Fallen Lord.’ It was built in the 17th century and many worshippers hike up the mountain to offer prayers and sacrifices at the church. There a few restaurants and cafes at the top of the mountain that serve hot foods and drinks to the hikers.

Museo Del Oro is a special and interesting museum in the city. It’s home to around 30,000 gold pieces that have been beautifully showcased. The museum has 3 floors filled with artifacts dating from pre-Hispanic times. There are plenty of stories told about how people mined gold, how they worked the metals and other equipment. The entrance to the museum is free, children as specifically encouraged to visit. There is valuable information given as to the symbolism and spiritual aspects of gold.

The plaza bolivar is home to Colombia’s Palace of justice, the capital building, the cathedral of Bogotá and the mayor’s office. Don’t get spooked to see a lot of policemen around, they aren’t there for you! They offer tight security surveillance to the presidential palace well known as Palacio de Narino. For a solo traveler seeking places to learn more about ancient history, the Plaza Bolivar is where to be. You will learn about Colombia’s history and the fight for independence in the olden Pablo Escobar times.

THE SALT CATHEDRAL OF ZIPAQUIRÁ

This salt cathedral is located in the town of Zipaquirá about an hour’s drive from the city. There are daily trips to this beautiful gem offered by several tour operators. The cathedral is huge covering an area of about 180 meters. It was carved underground in a salt mine and the sight is just out of this world. Tourists can make their prayers at the alcoves and dazzling lit crosses are provided.

There is nothing that can make one mesh with the locals than being able to freely shop at the flea market. The Mercado de las Pulgas de Usaquén is a street market that takes place on Sundays in the south of Bogotá. The vendors set up pop-up stalls in the streets and parking lots to sell a range of products from vintage handicrafts, clothing, and jewelry. There are plenty of upscale cafes and restaurants at the edge of the market that serves delicious food and local beer to shoppers.

The cherry at the top of any holiday is being able to have an extrinsic night after a day of intensive sight-seeing. The Zona Rosa is the best place to tour if you are looking for a hyped and trendy night-out. It’s home to tons of bars, restaurants, and malls. There is a pedestrian street called ‘Zona T’ with outside seating where tourists can drink and dance away the night. The LGBT community is right at home at the El Chapinero where you can spot a bunch of gays and lesbians.