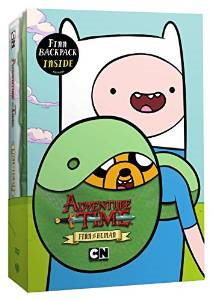 Adventure time Finn the human DVD with backpack. My son Devon loves watching adventure time. No matter if it’s a repeat or not. I am so glad we had the chance to review the new DVD. My favorite character is the ice princess. In this episode Finn and jake follow the lice through portal. Where Finn is transported into an alternate reality. Where he s a normal human living with his family and his dog jake, on a farm. Finn discovers a magical ice crown, which he attempts to use to repay his family debt. After he wears it in his head, he magically has the power over ice and snow.

The episodes are funny and have a wit all their own. If you have never watched this cartoon before, you have to take some time to check it out for yourself, as you will quickly see why this quirky cartoon grows on you the more that you watch it!.

This includes season 1-4 with bonus filled episodes which has the following shows:

Devon loved this Dvd he sat with me and watched it, and clapped and laughed . My favorite one is also when hes defeating the zombie candy, they have made it a cute dvd and we are very happy with it .

The story for “Finn the Human” is a continuation of the plot from the fourth season finale “The Lich”; the plot was continued on into the following episode, “Jake the Dog”. “Finn the Human” was watched by 3.435 million viewers and received largely positive critical acclaim, with writers from The A.V. Club and IndieWire applauding the episode for being both an excellent season premiere, as well as a creative challenge, respectively. For more information click here.